A downloadable game for Windows

It's Christmas Eve during the Zombie Apocalypse and Santa's sleigh crashed over the zombie infested lands. Hordes of undead and other depraved creatures crawl out the icy grounds to get a piece of Saint Nick. Can you survive until Christmas Day or is Christmas ruined forever?

Pick from a deck of upgrades to increase your firepower and add other effects to your gun. For example, equip your shotgun with the ability to shoot multiple projectiles that have a chance to burn your targets. Or electrocute them. Each run you earn coins to unlock more skill cards to choose from and find the most destructive combinations.

Development background
This game was originally made for the GDU Winter Jam 2021. Thanks to the positive response I have gotten here on itch and tons and tons of downloads I decided to turn it into a proper release. Some substantial changes were made over the year and now it is quite different from the original jam version I made in 1.5 days. I hope you will still enjoy it! Happy holidays

In order to download this game you must purchase it at or above the minimum price of $4.99 USD. You will get access to the following files:

I enjoyed this game a ton! Great shooting mechanics, not too challenging looks great!

Played it. Very fun! Addictive. I liked that there's a tree with upgrades. Shooting felt great. The first screen was cut off at the top in 3440x1440, but it's not particularly important. I died because of getting hit from behind and I didn't really have any way of noticing it (imo), but I assume that's by design to make the player look around more. Flying ragdolls were a bit weird, but funny I guess, I would expect that from the shotgun, but it was even more weird when it happened after a nailgun shot. Nailgun didn't feel like it was worth unlocking at all, maybe later it will be stronger, but it didn't feel fun to use for me, mostly because of the lack of damage, maybe it would be more fun if you could shoot if without zooming in? The zoom in has a small issue btw: when you aim at the zombie and then you press the right mouse button to zoom in you no longer aim at the zombie, which is slightly annoying, but you can get used to it. Coin upgrade didn't seem to be worth it compared to other upgrades. Other than that the gameplay was a ton of fun and I played it a lot longer than I expected. Good job! And good luck with the release!
Here's my gameplay (with some voice over) if you want to check it out:

Announcement!
Thanks to everyone who commented their gameplay videos over the past year. I have taken down the old gamejam build for now and will upload a new demo soon that reflects the current state of the game better. I hope you will have fun playing it as well and I look forward to your valuable insights and feedback!

Reply
jgab_gameplay1 year ago
this is so coo
Reply
NaughtyLittleDevil1 year ago
Just thought it was going to be a little longer. Like having to find the presents first. Then try to put them under the tree while shooting zombies. Still fun little games
Reply
gypynkt1 year ago

Thank you for playing. The time constraint during the jam and December being the busiest month workwise for me led to the current version being really short and not having too many features. I have already improved on a lot of things (Santa can kick the zombies now and they can actually hurt you) but just don't have the time to finalize the update. Hope it will be soon...

Leave Santa a pack of shells instead of milk and cookies. This was really fun.

Thanks for the silly time, wish there was more challenge/threat though :P

Very Nice game :D It was night, but I laughed out loud xD

There's nothing more horrifying than an angry horde of Santa's elves swarming The Big Man with a vengeance!

Thanks, happy to hear that, hoping to get the update out soon. The music was created by Kevin MacLeod.

Thanks for playing Kieran, it was a lot of fun watching your playthrough. You showed those sleepy Canadians who's boss!

Thanks for playing and uploading your footage. Also appreciate the 5 Star rating! I'm working on the postjam update at the moment to flesh the game out a little more.

It was satisfying firing the shotgun against a horde of zombies as Santa.

This was such a fun game! The shooting and atmosphere is comedic and fun! Especially, for the Jam game, this is brilliant. Good Job dev!

Thanks for playing. Glad you enjoyed it. I still have a couple things to fix over the week, hope it will make it even better! 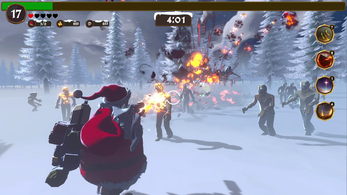 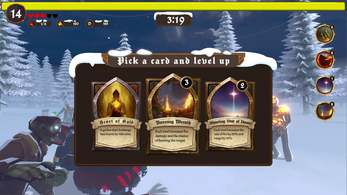 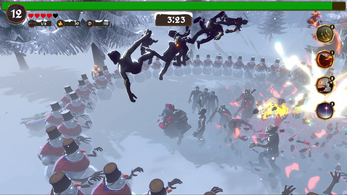 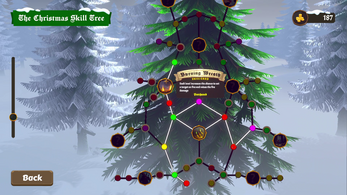 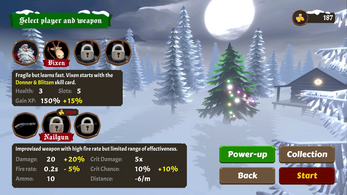 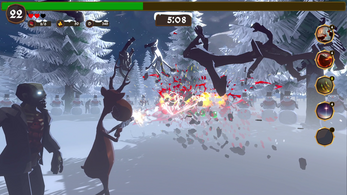 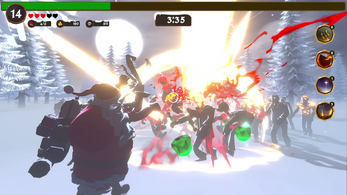 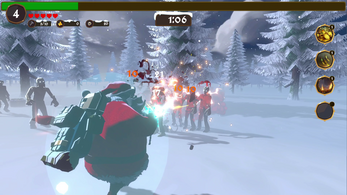